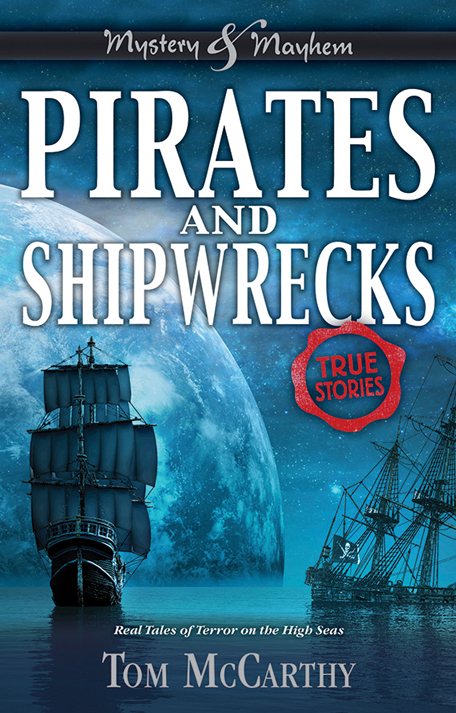 Pirates and Shipwrecks: Real Tales of Terror on the High Seas

Pirates and Shipwrecks: Real Tales of Terror on the High Seas

By Tom McCarthy
Pirates and Shipwrecks: True Stories is the first in a new series for 9–12 year olds called Mystery & Mayhem, which features true tales that whet kids' appetites for history by engaging them in genres with proven track records–mystery and adventure. History is made of near misses, unexplained disappearances, unsolved mysteries, and bizarre events that are almost too weird to be true–almost! The Mystery & Mayhem series delves into these tidbits of history to provide kids with a jumping-off point into a lifelong habit of appreciating history.
Read More 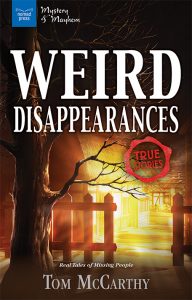 Why have the people of Roanoke Colony never been found? Historians are still trying to answer that question. Weird Disappearances: Real Tales of Missing People tells five true stories of people who vanished–against the backdrop of historical circumstances, such as the carving out of a new world in an ancient culture. 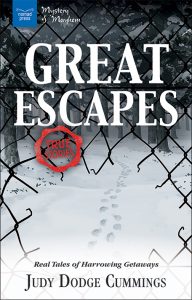 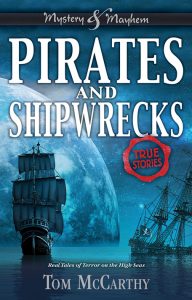 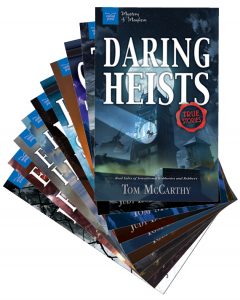 Geekdad.com
This Mystery & Mayhem series has really grabbed my son's attention. The second book he enjoyed was Pirates and Shipwrecks, another 124-page book filled with five true tales involving ships and pirates. In these pages, he read about Daniel Collins encounter with pirates after his captain and crew mates shipwrecked. The tale is not for the faint of heart, with its gruesome details of the crew's fate at the hands of the pirates. I thought my son would toss the book away after we read that first chapter together, but apparently young boys know what to expect when it comes to true tales of pirates… he was hooked... I asked my son which was his favorite of the two Mystery & Mayhem books-it was the Pirates and Shipwrecks book, of course! He was also quite pleased when I told him that there are two more books coming out in the series in May 2017-Weird Disappearances and Daring Heists." Read the entire review online.

This Kid Reviews Books Blog
"Mr. McCarthy has written another book that is just as good as the Survival book. Also nonfiction, these true stories tell of real-life pirates, and also real-life shipwrecks that almost (or even did!) turned into disasters. It was an interesting look into a different time. The one thing I like about both books is that they include maps of where the events take place. Mr. McCarthy's writing style is well organized and well written, with a lot of information for the readers. The book does mention cannibalism, and some of the people were beheaded by pirates, but the book doesn't go into detail, and only writes what had to have been written to write an accurate novel. The books are shorter, and good for a quick read, especially chapter by chapter. A really nice nonfiction series! I give this book five out of five bookworms!"

Novel Novice Blog
"History comes alive in the new Mystery & Mayhem series from author Tom McCarthy — a new non-fiction series that aims to get young readers excited about history by sharing thrilling, real-life stories of adventure and intrigue. I love the concept of this series — and so far, I love the books in the series, too!"

Mom Read It Blog
"If it's pirates ye be wantin', pirates you'll get here! Stories of the unlucky crew of the Betsey, shipwrecked and met by pirates; the 1857 recovery mission to discover what happened to an Arctic expedition that never came home; the story of Mary Read, one of the blood thirstiest pirates ever to set sail - and a female!; the crews of two shipwrecks try to stay alive in a land populated by cannibal tribes, and the story of Barbarossa, the most feared pirate in the Mediterranean.  There are five stories of pirates and shipwrecks here, all true. Pirate fans, brandish your cutlasses, put on your eyepatch, and have a seat; these are the stories of the real Pirates of the Caribbean (and then some)! ... These are a fun series that will appeal to adventure readers. I've got a few fourth grade class visits booked for October (already!), so I may see how a read-aloud from one of these books goes." Read the complete review online.

Kirkus Reviews
"Five true tales of pirates and shipwrecks spare none of the intriguing and grisly details. Employing a casual, conversational tone that reads easily, McCarthy spins five yarns of bloodthirsty pirates and harrowing shipwrecks. The first offering portrays the terrifying experience of sailors who survive a shipwreck only to land on a beach of decapitated, sun-bleached skeletons. The next, another account of nautical distress, tells of a lost ship, reports of possible cannibalism, and the expedition that set out to learn the truth. The third recounts the tales of two fierce female pirates who were just as ruthless and bloodthirsty as their male counterparts. The fourth and fifth deliver more tales of maritime mayhem and cutthroat (quite literally) pirates, keeping up the lively pace already established. McCarthy shows a good sense for the interesting and gory detail, offering up plenty of blood-soaked action while keeping it appropriate for a young readership. Included after each vignette are other notable facts of the time period, and at the end of the offering is a glossary and resources. Releasing simultaneously is Survival, a volume that follows the same format and offers accounts of events such as the Donner Party disaster. Recommend this to fans of the I Survived . . . series who might be seeking a bit more fact and a little less fiction. A breezy offering just right for fans of survival tales."

Pirates and Shipwrecks: True Stories is the first in a new series for 9–12 year olds called Mystery & Mayhem, which features true tales that whet kids' appetites for history by engaging them in genres with proven track records–mystery and adventure. History is made of near misses, unexplained disappearances, unsolved mysteries, and bizarre events that are almost too weird to be true–almost! The Mystery & Mayhem series delves into these tidbits of history to provide kids with a jumping-off point into a lifelong habit of appreciating history.

Introduction
Terror on the High Seas

Chapter One
The Lucky Escape of Daniel Collins

Chapter Three
Fiercer Than Most Men

Chapter Four
The Wild Men of the Andamans