Why Did the Chicken Cross the Mobius Strip? 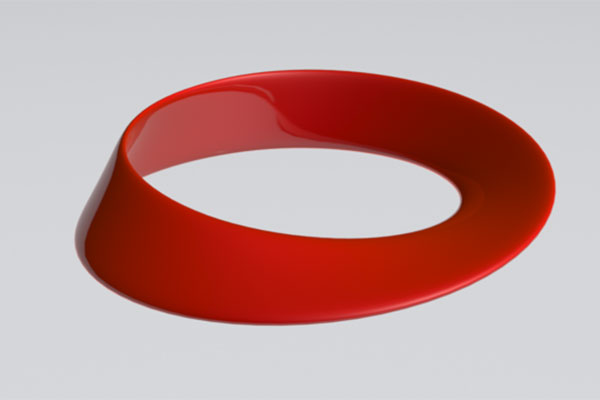 To get to the same side!

A strip of paper connected into a half loop is one of the most intriguing shapes you’ll ever encounter! For such a seemingly simple shape, it has some amazing qualities. For example, it has only one side. What?! How is that possible?

The Mobius strip was discovered in Germany in 1858 by two different people working independently—Johann Benedict Listing and August Ferdinand Mobius. Listing came up with the idea a few months earlier than Mobius, but it’s the Mobius name that graces the mathematical concept. We don’t know why. It’s one of those science mysteries that can’t be solved in a laboratory!

A Mobius strip has only one side, even though it looks like it has two sides. The best way to learn about these amazing strips is to create one yourself. Here’s how:

Cut a long strip of newspaper about 2 inches wide.

Bring the ends of the strip together to form a loop. Give one end a half-twist and tape the ends together.

It’s your very own Mobius strip! Now you can demonstrate some of its bizarre traits. Try this:

Place your pencil in the middle of your Mobius strip and draw a line along the length of the strip, keeping pencil to paper the whole time. What happens? What does this prove?

Try making a new strip by giving the strip two half twists instead of one and perform the same experiments. What happens differently? How else can you twist your paper strips? What other interesting shapes can you make?

Because a Mobius strip only has one side, if an ant walked all the way around it, it wouldn’t ever have to switch sides, just like the famous artist M.C. Escher demonstrated in this painting.

Want to see more? Check it out:

You can read about other amazing math phenomena in the book Amazing Math Projects You Can Build Yourself!

Learn about the Mobius strip at Wonderopolis

Watch a Mobius strip get cut up in different ways

Here’s a mesmerizing animation of a Mobius strip