The Oldest Stuff in the World 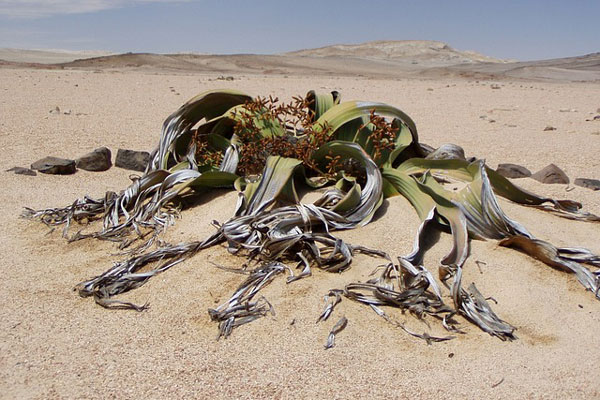 In many ways, we live in a disposable world. We use disposable dishes and silverware, we use paper towels that we toss in the trash after wiping up one spill, and every year many of us get new clothes and shoes to replace the ones that no longer fit.

Even the cars we drive, the computers we use, and the refrigerators that keep our food cold have shelf lives. Nothing, except maybe the houses we live in, is likely to last beyond five, ten, or twenty years.

Welwitschia is a tree. A very old tree. They grow in the Namib Desert in Africa and the larger ones are thought to be as old as 2,000 years. Think of the history happening all around this guy for more than 2,000 years. The fall of the Roman Empire, the Middle Ages, world exploration, the Spanish Inquisition—humans performed their very human activities while the welwitschia minded its own business of survival.

These trees grow very, very slowly. They live in the part of the desert where foggy mornings are the norm, and their leaves are the ideal shape for collecting condensation and guiding those tiny amounts of water toward the roots—essentially, the tree waters itself with condensation from the fog. These trees have very long roots that tap into an underground reservoir. They feed slowly, they grow slowly, and they die slowly.

Another interesting fact about welwitchia is that it’s the last of its kind. Over the millennia, all of its cousins have died away, leaving it the only remaining plant in its genus.

Even though welwitschia aren’t rare or endangered, they are still protected by law. Why? Because while our world is fast-paced and disposable, some of us still value things that are old, slow, and steady. Like welwitschia. And to let the last surviving kind of anything blink out of existence is irresponsible and selfish.

So the next time you find yourself in the Namib Desert, take some time to seek out a welwitschia. The stories this plant has lived through fill up our history books. Our human lives may be short and quick, but we can make them better by accepting the role of protectors of these ancient witnesses.

WHAT ELSE IS REALLY OLD?

Oldest living human ever: Jeanne-Louise Calment, who lived from 1875 to 1997. She died at age 122. Other people have claimed the title of oldest human being, but only Jeanne-Louise has been able to prove it with birth records. You can see pictures of her from age 20 to age 122 here.