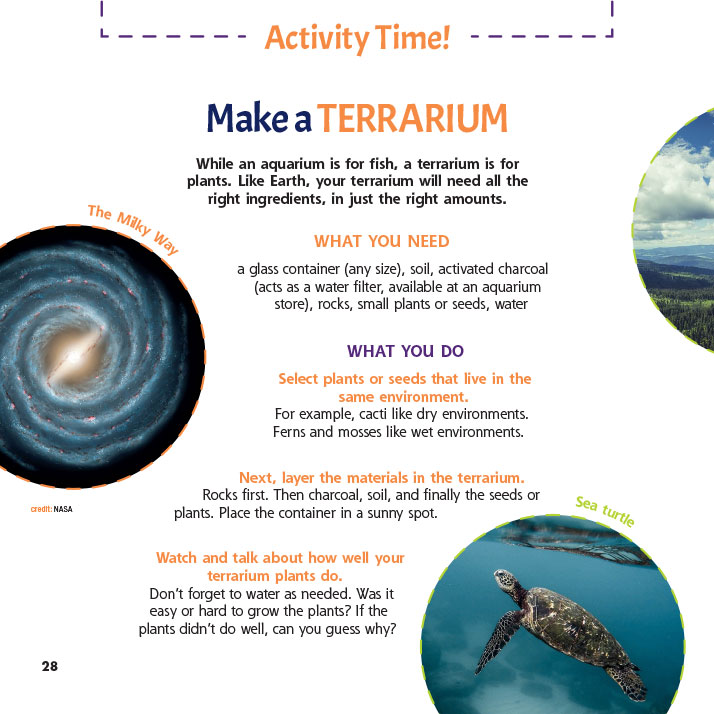 While an aquarium is for fish, a terrarium is for plants. Like Earth, your terrarium will need all the right ingredients in just the right amounts.
Download a Printer-Friendly PDF

Featured in The Earth 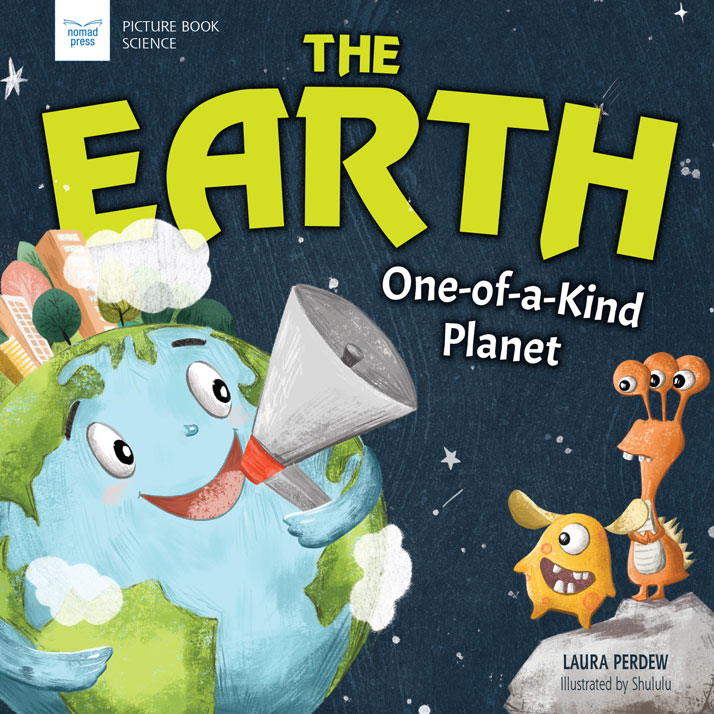 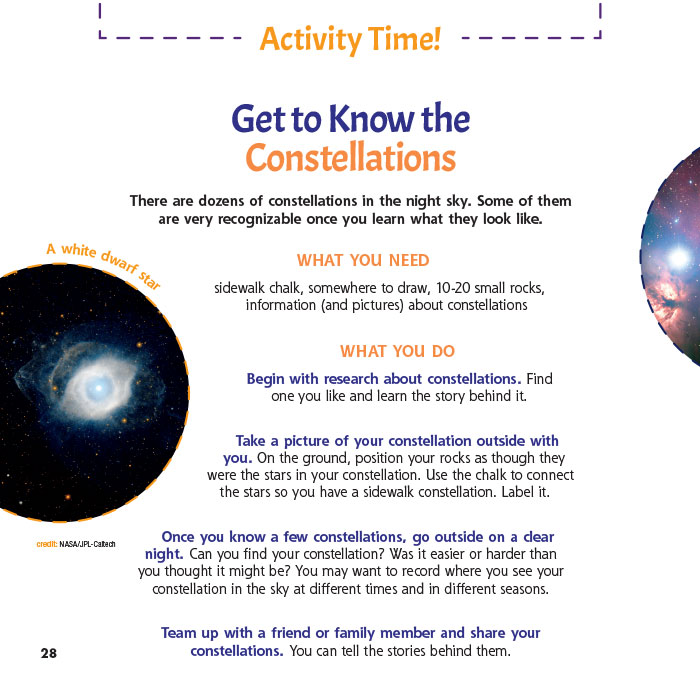 Get to Know the Constellations

There are dozens of constellations in the night sky. Some of them are very recognizable once you learn what they look like. 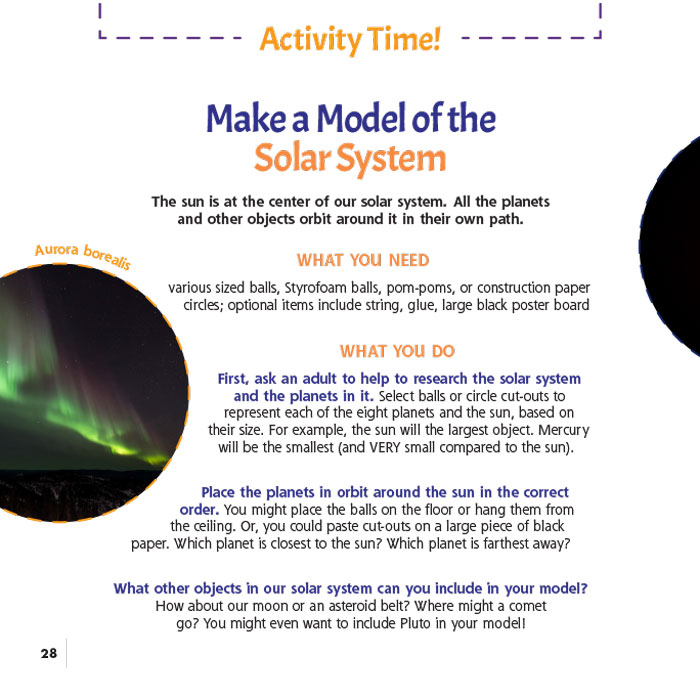 Make a Model of the Solar System

The sun is at the center of our solar system. All the planets and other objects orbit around it in their own path. 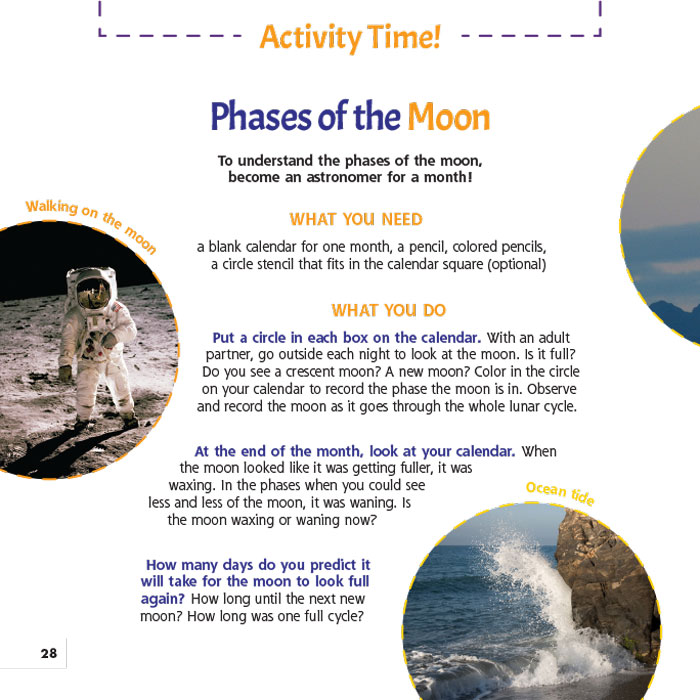 Phases of the Moon

To understand the phases of the moon, become an astronomer for a month! 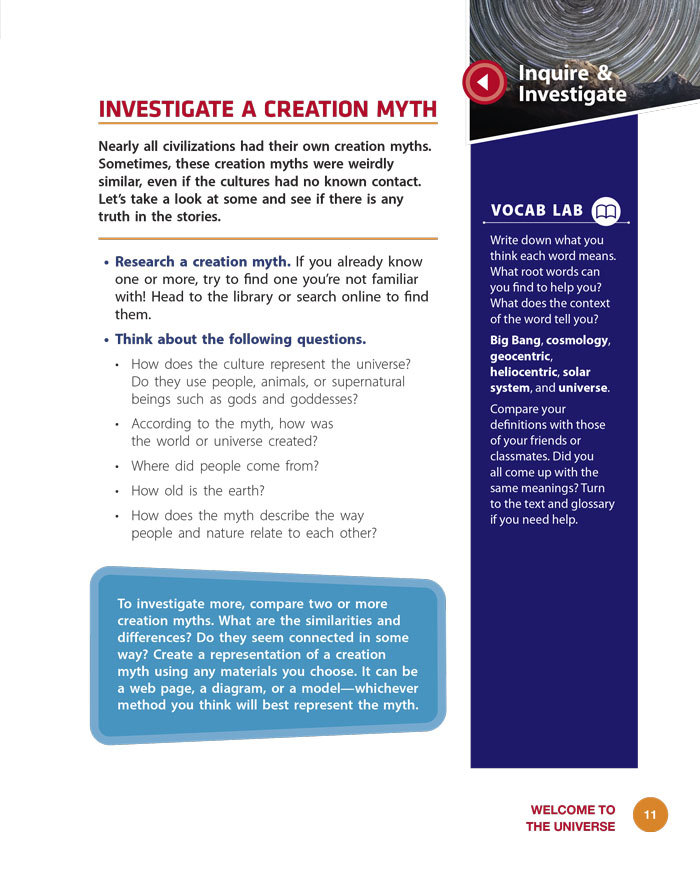 Nearly all civilizations had their own creation myths. Sometimes, these creation myths were weirdly similar, even if the cultures had no known contact. Let’s take a look at some and see if there is any truth in the stories.

Kirkus Reviews
"The universe brags about one of its best and favorite parts.

Depicted as human with lightly toned skin and billows of black hair a-glimmer with stars, Universe squires two wisecracking E Ts past the planets (“a pretty neat system, if I do say so myself”), then recaps the history of this one from “hot, bubbly, gassy mess” through the development of life to the appearances of satellites and pizza. In simple language she explains the roles oceans, the water cycle, and our planet’s placement in the “Goldilocks” zone played in the appearance of us. If she sounds a note of warning about the need to fix pollution and other hazards to life, it only briefly dims her conviction that we will indeed step up. Heavenly bodies, microorganisms, and, on later pages, racially diverse groups of children sport bright, googly eyes and benevolent smiles in the cartoon illustrations. In co-published tours that echo the upbeat tone, Universe presents viewers with basic introductions to The Moon (our “Small-but-Mighty Neighbor”),the life cycles of a “gazillion” Stars, and our own “Shining Star,” The Sun. Each outing ends with general directions for a relevant activity (for Earth, creating a terrarium) and, injecting the Art into STEAM, opens with an earnest poem.

Booklist
"The Earth highlights unique features that let our planet support life and instructs readers in how to create a terrarium. Each volume is narrated by the Universe, which is presented as a proud parent bragging about its offspring. Additionally, two wise-cracking alien punsters contribute bits of trivia, introduce new vocabulary, pose goofy or thoughtful questions, and keep the narrative flowing. The cartoon-like illustrations align closely with the text, illuminating abstract concepts, and the kid-friendly text will attract beginning readers."

Praise for other books by Laura Perdew

Booklist - Top 10 Books on the Environment & Sustainability for Youth: 2020
“Activities and accessible text bring the importance and complexity of biodiversity to upper-elementary and middle-school students.”

Booklist - Starred Review
“Nomad applies its dependable activity-book format to the new Build It Environmental Science series (4 titles). Here biodiversity is placed under the microscope—sometimes literally—in a text that makes daunting concepts, such as evolution, levels of biodiversity (genetic, species, or ecosystem), and why biodiversity matters, easy to understand without sacrificing scientific precision. . . By book’s end, readers will truly understand what biodiversity is, its importance to the health of the planet, and humans’ impact on the complex natural systems where it thrives.”

Extinction: What Happened to the Dinosaurs, Mastodons, and Dodo Birds?

National Science Teachers Association Recommends
“This book uses the concept of extinction to teach a little chemistry, a little climatology, paleontology, biology (biodiversity), ecology, and a lot of geology. The science information is historical and current, drawing on three–dimensional learning, incorporating science practices to determine what factors affect extinction in general and specifically. The integration of concepts help bring the science alive and relevant.”

Earth is our home, but how much do we really know about our planet?

Quite a lot! In The Earth: One-of-a-Kind Planet, the narrator, who just happens to be the universe, explains where Earth is located in the solar system, how Earth was created, how life evolved on Earth, and more. Universe uses a friendly, relatable tone to engage young readers and explain complex science content in ways kids can understand and relate to. And the alien commentators are hilarious for both kids and adults!

Perfect as a read aloud or for beginner readers, this book includes a hands-on activity, glossary, and a poem!