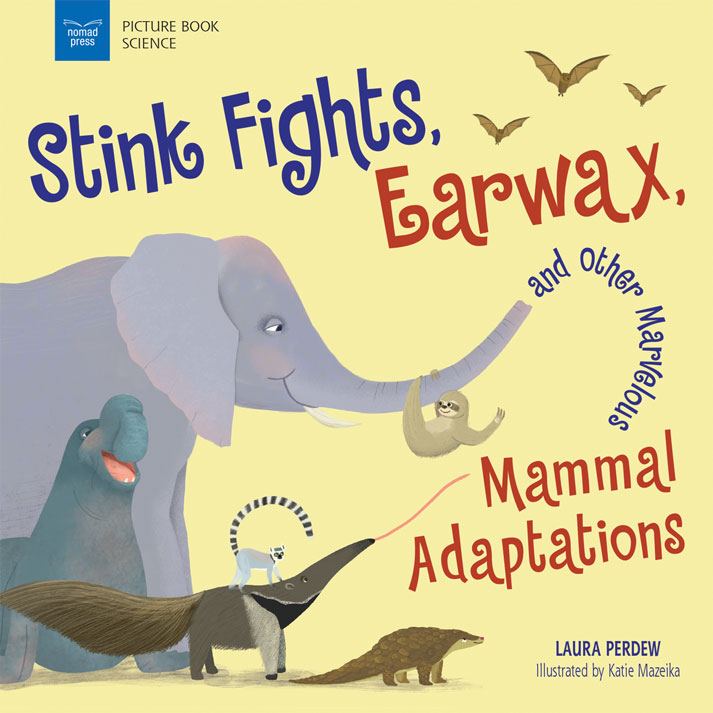 By Laura Perdew
Illustrated by Katie Mazeika
How do whales make their hearing better?  What do lemurs do to make a point during an argument? In Stink Fights, Earwax, and Other Marvelous Mammal Adaptations, children ages 5 to 9 learn how lemurs settle arguments and how earwax helps a whale’s sense of hearing, along with a host of other deliciously strange-but-true tales!
Read More 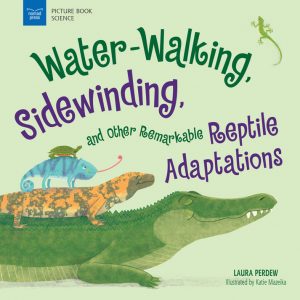 A lizard that walks on water? A snake that slithers sideways? These are animal adaptations! In Water-Walking, Sidewinding, and Other Remarkable Reptile Adaptations, children ages 5 to 9 learn how and why the green basilisk lizard runs on the water’s surface, along with the very good reasons sidewinder snakes move the way they do. 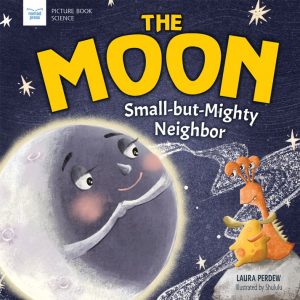 The moon is one of the smaller celestial objects in the universe, but it has some very important jobs. Without it, Earth would be a very different place! Narrated by the character of the Universe, The Moon: Small-but-Mighty Neighbor offers up clear scientific explanations designed to gets kids excited about astronomy, covering topics such as the 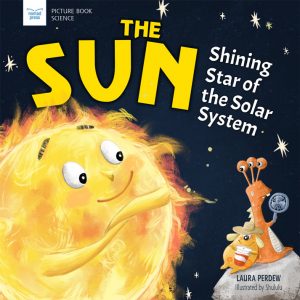 Shining Star of the Solar System

There are trillions of stars in the universe, but one is particularly important to people on planet Earth—our sun. What’s the sun good for, anyway? Find out as the Universe explains just what makes the sun so important to planet Earth in The Sun: Shining Star of the Solar System. 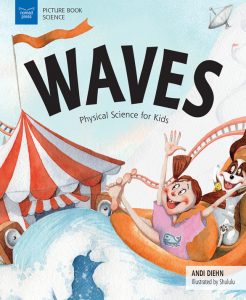 This installment in Picture Book Science, a set of books about physical science for kids ages 5 to 8, encourages readers to observe lots of different kinds of waves, including those found in water, wheat, a baseball stadium, and even invisible waves! By combining children’s natural curiosity with prompts for keen observations and quick experiments,

Green Teacher Magazine
"There comes a time as an adult when you can pick up some children’s books and enjoy learning something NEW! The two books Antifreeze, Leaf Costumes, and Other Fabulous Fish Adaptations and Stink Fights, Earwax, and Other Marvelous Mammal Adaptations both taught me something! (I did not know, for example, that Blackspot Tuskfish use tools to get their meals or that whales have earwax that actually helps them hear.) The author, Laura Perdew, does a wonderful job keeping the facts about adaptations simple but still scientific. The illustrator, Katie Mazeika, does a fabulous job of providing big, bright colors to help get the message across. I also appreciated the glossary and “Activity Time” pages in the back of the book that help reinforce the topics that were covered."

Archimedes Notebook Blog
Fun New Series on Animal Adaptations
"Let’s face it: animals are cool! And most kids I know love to read about animals. What’s even better than a book about animals is a whole series of books about strange and wonderful animal adaptations.
Laura Perdew has written a whole bunch of books – well, at least five – about animals and their unique adaptations. They are fun and breezy, and a perfect way to introduce young children to the different classes of vertebrate animals: reptiles, birds, mammals, amphibians, and fish.
Did you know that some fish have antifreeze and that archerfish shoot their prey? That water-holding frogs can stay buried for two years? Perdew introduces readers to unsung heroes of the animal world: star-nose moles, blue-footed boobies, and thorny devil lizards. She sings the praises of salamander slime and whale earwax." Click here to read the complete  review online.

Booklist Series Nonfiction Showcase
“Through layered, mischievous illustrations and detailed back matter, the Picture Book Science series plies young readers with a ton of useful facts about how all sorts of animals have evolved to survive in their environments. Antifreeze includes fish that use suction cups to climb rocks (the Hawaiian goby) and fish that can breathe air (the lungfish, of course!). In Spit Nests, readers will observe the complex mating rituals of bowerbirds and blue-footed boobies and learn the gross-but-useful reason for a vulture’s bald head (and their even grosser defense mechanism). Stink Fights delves into the weird, wide world of mammal adaptations, which includes whale earwax plugs, star-nosed mole sniffer sensitivity, and everything in between. Sunscreen showcases primarily frogs, which are capable of some of the most bizarre things of all in the name of self-defense—some cover themselves in slime and others can even use their own poisonous bones as weapons after pushing them out through their skin. Each book contains a hands-on activity that will get kids involved; the mammal volume even points out that human beings are mammals, too, and encourages students to consider their own place in their ecosystems. Classroom-friendly and fun, too.”

School Library Journal
“This entertaining science title highlights unique adaptations of 14 mammals. Following a few introductory pages, each animal is given a two-page spread. Animal profiles feature a simple topic sentence or fact rendered in a playful font. Brief paragraphs with smaller-size text offer additional information. A couple of descriptions seem subjective, such as the sentence discussing the southern elephant seals: “Like sloths, southern elephant seals may look like a bunch of large, lazy bums—with funny noses—when they are on shore. In the water, though, they move like a torpedo.” Discussion questions encourage readers to contemplate animal adaptations beyond the text. In the section on bats, readers are asked, “How would you like to sleep upside down to make it easier to get out of bed?” With the exception of some small photos in the back matter, the animals are illustrated in color. Mazeika’s illustrations use an anatomically correct but cartoon style. The animals are depicted as happy, serene, or playful. For example, the bats are drawn with softened facial features and smiles. Each animal appears in its natural habitat; the various environments showcase a nature-inspired palette. Back matter includes simple activities, facts, and a glossary. ­VERDICT Enjoyable, light reading for browsers and fans of animal nonfiction. A good addition to classroom libraries.”

CLEAR Reviews
"Science teachers will discover much to share in their classrooms, while students in grades 1-4 will find these texts entertaining enough for independent reading." 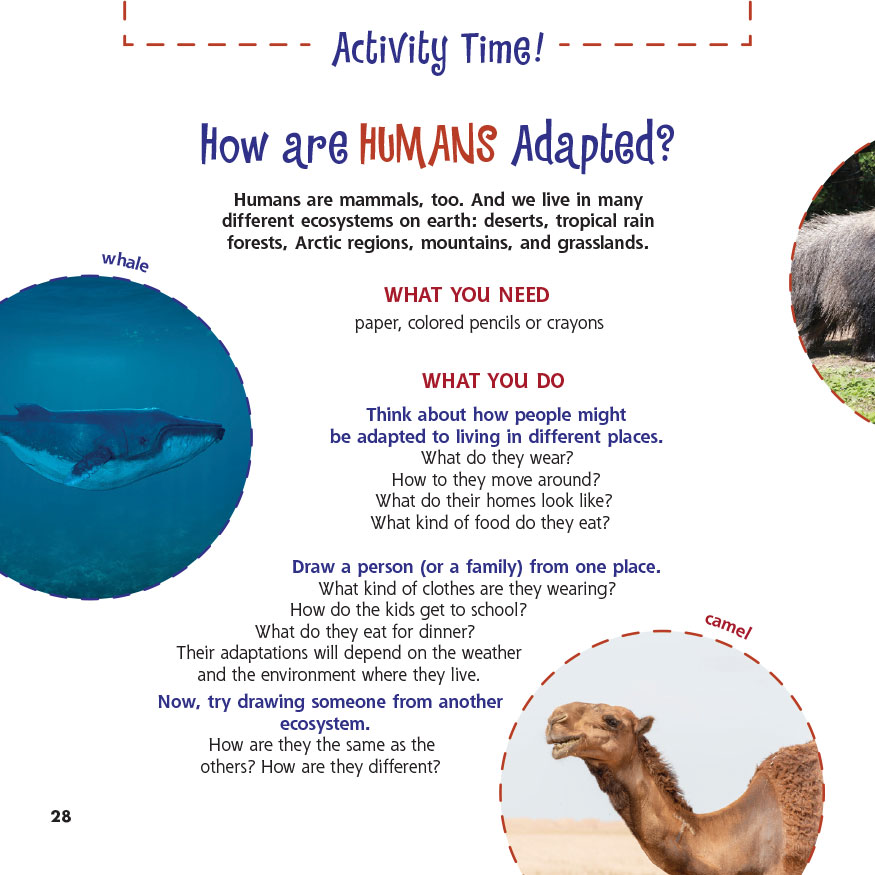 How do whales make their hearing better?  What do lemurs do to make a point during an argument?

In Stink Fights, Earwax, and Other Marvelous Mammal Adaptations, children ages 5 to 9 learn how lemurs settle arguments and how earwax helps a whale’s sense of hearing, along with a host of other deliciously strange-but-true tales! The lively conversational tone and the hilarious descriptions of bizarre adaptations engage a child’s sense of wonder while providing an introduction to a crucial scientific concept. A great choice as both a read aloud and for early readers.