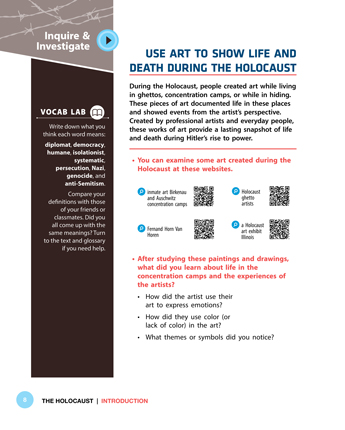 Use Art to Show Life and Death During the Holocaust

During the Holocaust, people created art while living in ghettos, concentration camps, or while in hiding. These pieces of art documented life in these places and showed events from the artist's perspective. Created by professional artists and everyday people, these works of art provide a lasting snapshot of life and death during Hitler's rise to power.
Download a Printer-Friendly PDF

Featured in The Holocaust 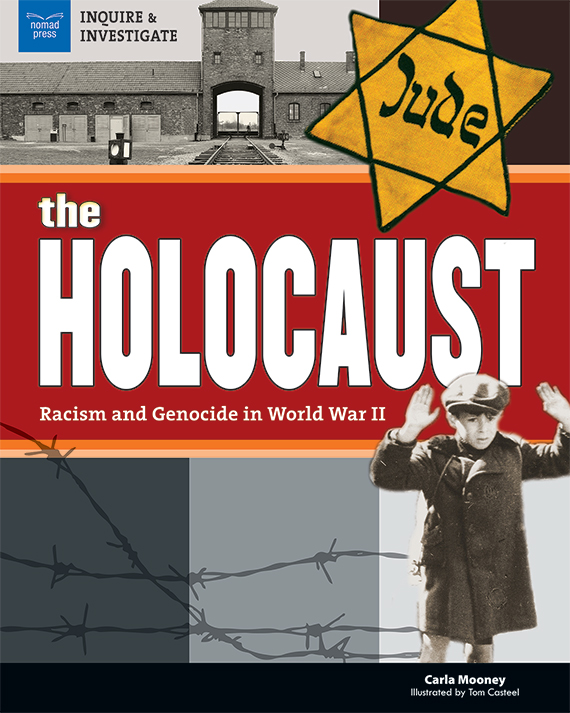 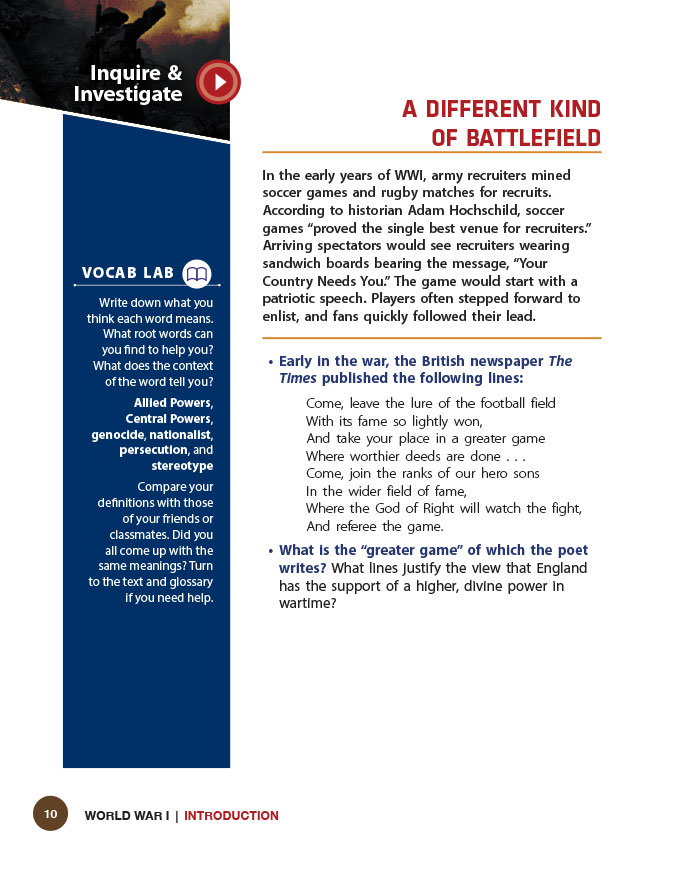 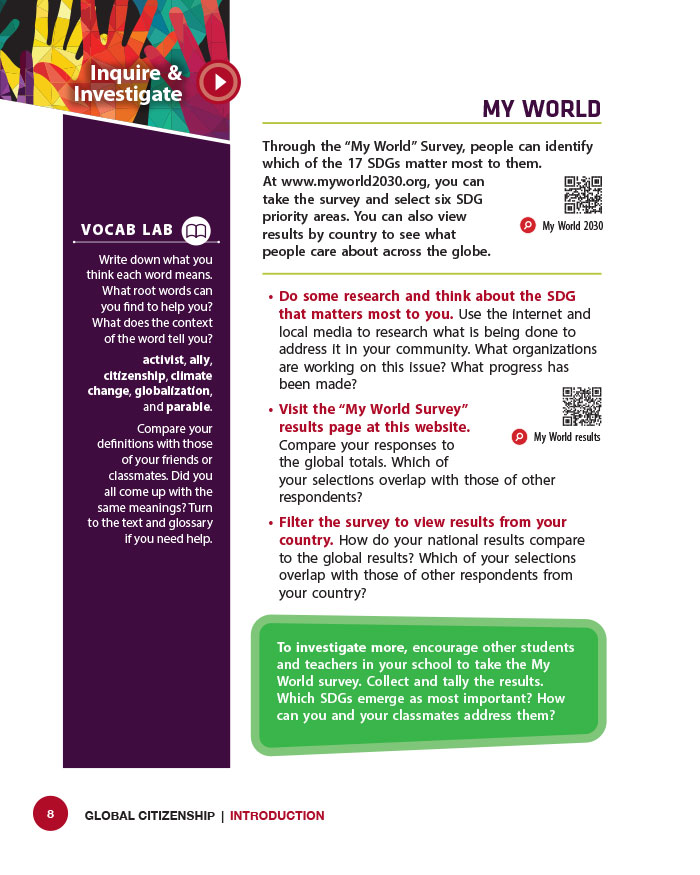 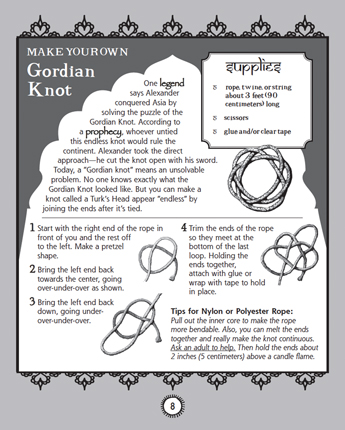 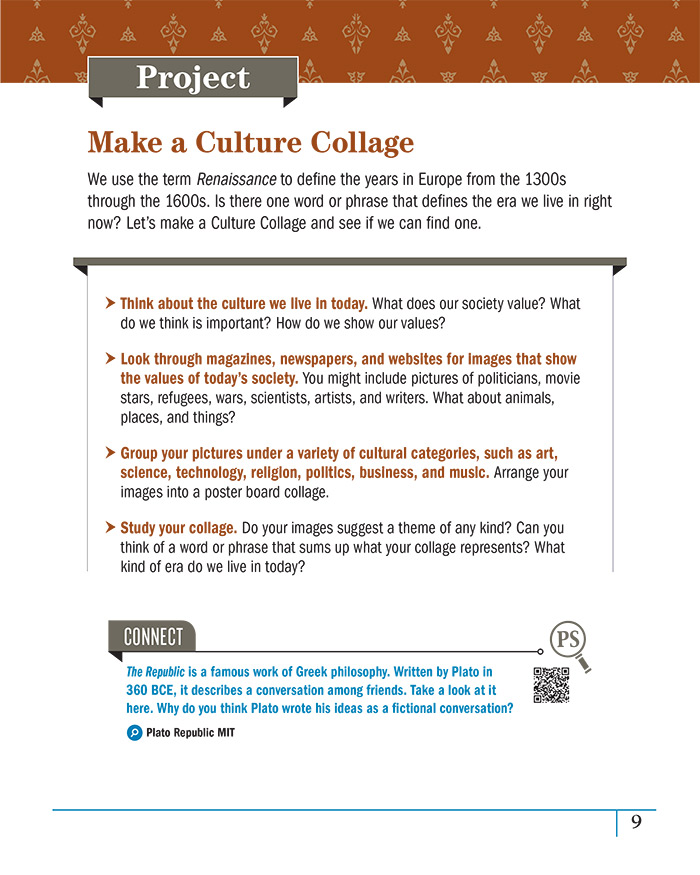 Children's Literature Review
This comprehensive, interdisciplinary guided study of the events that led to the Holocaust is designed to be used in a classroom situation. In addition to explaining the German decline that led to the scapegoating of Jews post-World War I, the book delves into the rise of National Socialism, Hitlers rise to power, the government-condoned prejudice against Jews, Romani, homosexuals, political prisons, and the disabled, among others. The author takes pains to explain the systemic destruction of approximately 75% of European Jews. In an attempt to inspire creative thinking about the Shoah and genocide in a more general way, sidebars and cartoons suggest vocabulary exercises, art and writing projects, and further exploration of internet sites accessible through QR codes with a cell phone, or through links provided to resource sites. . . . Six states in the U.S. have a required Holocaust curriculum and this will be a useful addition to their teaching.  Extensive backmatter includes glossary and resources.

Booklist
“This informative history of the persecution of the Jewish population during WWII begins by covering anti- Semitism from its beginnings through the Holocaust. It recounts Hitler's rise to power, his founding of the Nazi party, and the increasing prejudices shown during that period toward Jews and others, such as the Romani people. It explains how these prejudices led to the Final Solution, the systematic mass murder of the Jews in concentration camps... Readers will gain an understanding of why they must ensure that genocide on any scale never happens again. This is a good overview of the topic for middle-grade history classrooms.”

About 11 million people were killed during the Holocaust, when the Nazi regime carried out systemic mass murder of Jewish people, Soviet civilians, criminals, the disabled, mentally ill, and other groups of people. In The Holocaust: Racism and Genocide in World War II, readers ages 12 to 15 learn about the long history of anti-Semitism and the events of one of the deadliest genocides in history.

Introduction
What Was the Holocaust?

Chapter 1
The Jewish People and Anti-Semitism

Chapter 2
The Rise of the Nazi Party

Chapter 6
How Could the Holocaust Happen?

Chapter 8
The Legacy of the Holocaust