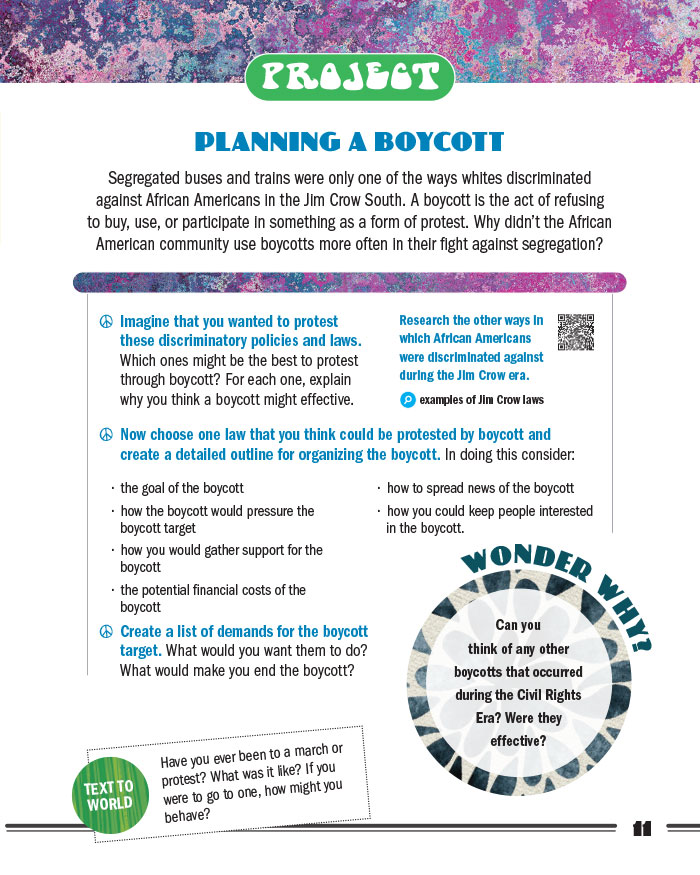 Segregated buses and trains were only one of the ways whites discriminated against African Americans in the Jim Crow South. A boycott is the act of refusing to buy, use, or participate in something as a form of protest. Why didn’t the African American community use boycotts more often in their fight against segregation?
Download a Printer-Friendly PDF

Featured in Boycotts, Strikes, and Marches 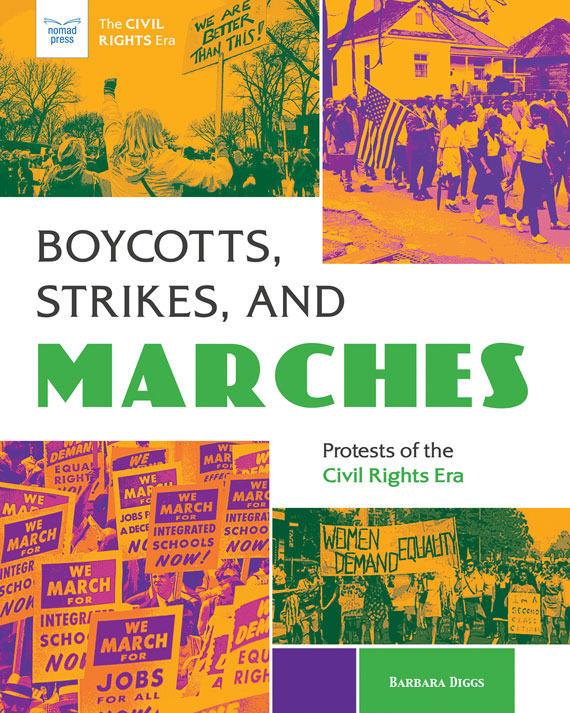 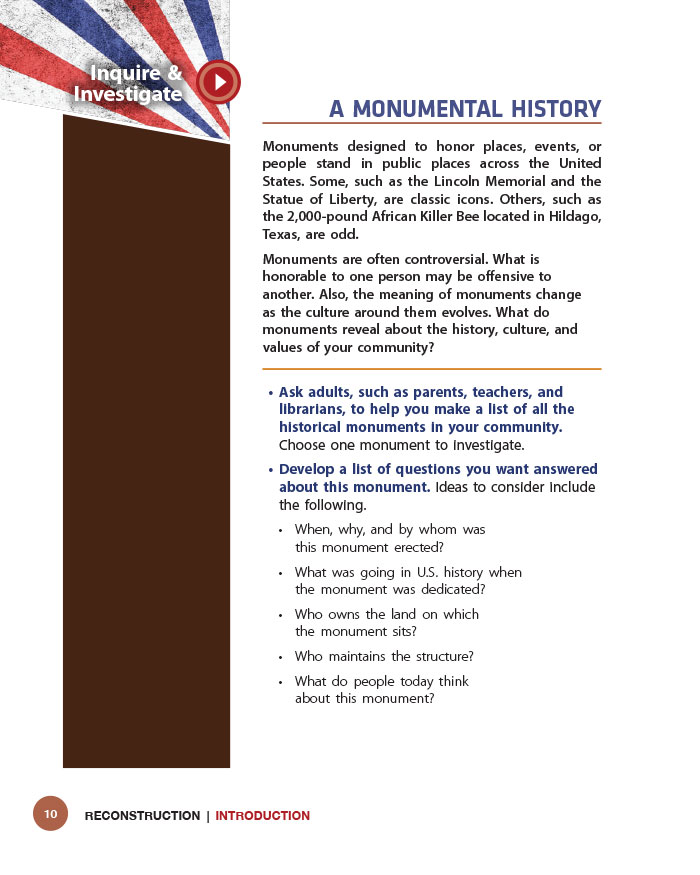 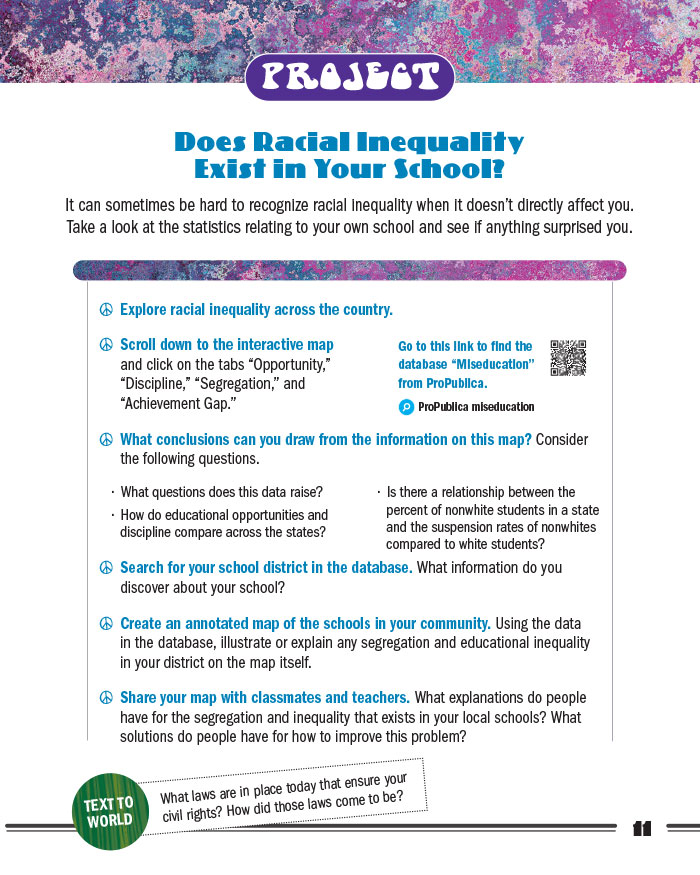 Does Racial Inequality Exist in Your School?

It can sometimes be hard to recognize racial inequality when it doesn’t directly affect you. Take a look at the statistics relating to your own school and see if anything surprised you. 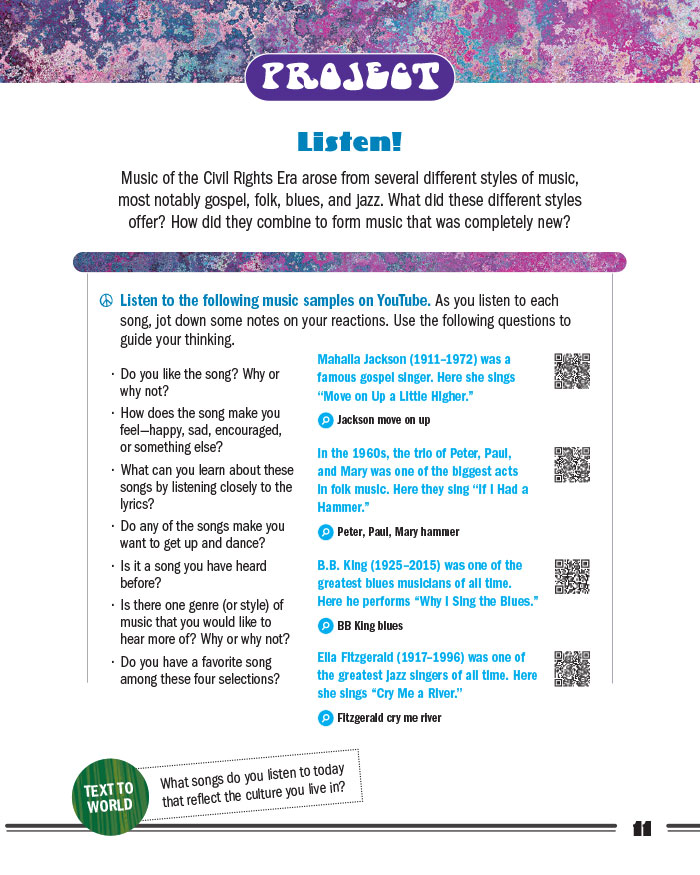 From Singing for Equality 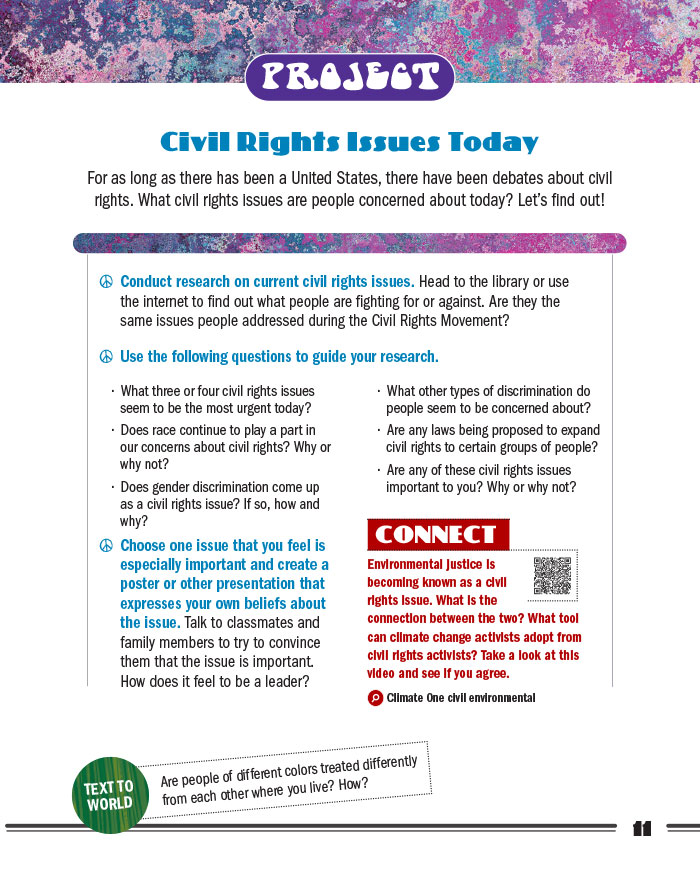 From Sitting In, Standing Up

For as long as there has been a United States, there have been debates about civil rights. What civil rights issues are people concerned about today? Let’s find out!

Booklist
"After a general introduction to protests in American history, each chapter in this informative book describes a significant single event or chain of events in greater detail, from its origins to its results. The five chapters explore the Montgomery bus boycott (1955–1956), the Vietnam War draft resistance (1963–1975), the Delano grape strike and boycott (1965–1970), the Stonewall riot (1969), and the Women’s Strike for Equality (1970). The many illustrations, mainly photos of people, places, and events mentioned in the text, are effective in portraying individuals and reflecting their times. Brief “Wonder Why?” features raise good questions, while sidebars introduce individuals and provide useful background information and historical context. From The Civil Rights Era series (4 volumes), here’s a concise, thought-provoking discussion of protest movements during a turbulent period."

School Library Journal
“This visually appealing title details the pivotal marches, boycotts, and strikes of the civil rights era. The Montgomery bus boycott, the Vietnam War resistance, the Delano grape strike, the Stonewall Riots, and Women’s Equality Day are explained in five chapters, which contain a balance of text, illustrations, photographs, definitions (i.e., protest, activist, Jim Crow laws), and critical thinking questions. Diggs spotlights lesser-known activists, such as David Ruggles (an African American abolitionist of the 1820s) and Dolores Huerta (an American labor activist who cofounded the United Farm Workers with Cesar Chavez). The text does an excellent job of connecting the events of the civil rights era to present-day leaders and social movements, such as Colin Kaepernick and Black Lives Matter. At the end of each chapter, readers are encouraged to reflect on what they’ve read. Each chapter also offers a suggested project, such as designing a protest flag. QR codes featured throughout the text provide access to more information about a particular topic or individual. A glossary, additional resources, a bibliography, and an index round out this solid nonfiction title. VERDICT ­Libraries that have the other titles in the series might want to purchase this latest entry, but the book can stand alone. It will serve as an excellent curricular aid for social studies units covering the civil rights era.”

Praise for other titles by Barbara Diggs:

Race Relations: The Struggle for Equality in America
School Library Connections
"Part of a series called Inquire & Investigate Social Issues of the Twenty-First Century, this volume is a highly relevant and concise look at race relations in the United States over the last four hundred years. Focusing on both famous and everyday people who have fought for freedom, equality, and justice, the book also encourages readers to think about their own viewpoints with thought-provoking writing prompts and key questions. The layout and pleasing photographs and graphics make reading the book very enjoyable, and the addition of the QR codes so that readers can delve deeper into a topic with primary sources is a great interactive approach. Recommended"

Booklist
"Covering a broader time period than the name suggests, the Inquire & Investigate Social Issues of the Twentieth Century series offers facts, historical perspective, and useful suggestions for young people studying key issues in America today. The writers encourage further study and thoughtful consideration of their books’ subjects, which have all seen shifts in political rhetoric and public perception over time. Besides presenting each topic, they challenge readers to engage in critical thinking and consider questions from various people’s points of view. The illustrations include many photos as well as cartoons. The books’ large format accommodates a good deal of information in the very readable main texts, while side margins carry related pictures, vocabulary features, and brief introductions to noteworthy figures and events. Well organized information and practical help for students researching significant social issues."

The Vietnam War
School Library Journal
"A well-organized and succinct work to accompany U.S. history units. The book follows the trajectory of the Vietnam War and includes vocabulary labs at the end of each chapter, project ideas, investigative questions and points to ponder or debate. Content includes the Chinese occupation, French imperialism, and U.S. sentiment following the fall of Saigon. The writing is concise with relevant sources and differing points of view. Tech enthusiasts will like the inclusion of QR codes with primary source videos and documents. VERDICT: This text could be used as a supplemental study guide for dedicated students."

In Boycotts, Strikes, and Marches: Protests of the Civil Rights Era, readers 12 through 15 explore five ground-breaking protests that took place during the 1950s, 1960s, and early 1970s. Become immersed in the excitement, challenges, and spirit of the Montgomery Bus Boycott, the Draft Card Burning Protests of the Vietnam War, the Delano Grape Strike and Boycott, the first Gay Pride March, and the Women’s Strike for Equality. Middle schoolers also learn about the conditions that prompted these demonstrations and how protest organizers used critical and creative thinking to surmount the challenges they faced to initiate meaningful change.

Introduction
What Are We Protesting?