Marbles, dominoes, and catapults. Maybe a few toy cars, a pulley, and a ramp. If you were Rube Goldberg, you’d throw in a parrot, some crackers, and a pendulum. Perhaps even a rocket.

What would you do with all of that? Build a Rube Goldberg contraption full of complicated chain reactions to perform a simple task, of course!

But wait, who is this Rube Goldberg guy? Rube Goldberg was a brilliant cartoonist, engineer, and inventor in the mid-1900s. He became famous for the crazy contraptions he invented that performed simple tasks in exceedingly complicated (and humorous!) ways. Some of his inventions include a self-operating napkin, an automatic back-scratcher, and even an elaborate plan to fish an olive out of a jar. But he never actually built a single one. Instead, the contraptions appeared in cartoons that captivated the public’s attention. People couldn’t wait to see what Rube Goldberg would “invent” next.

Thanks to engineering students at Purdue University, Rube Goldberg’s machines were finally brought to life in the form of a contest. Teams competed to see who could design and build the best contraption.

Crazy Contraptions: Build Rube Goldberg Machines that Swoop, Spin, Stack, and Swivel is for kids of all ages interested in learning a little about physics and the six simple machines, applying some engineering skills, building their own crazy contraptions, and above all else, having fun.

Watch this video about making a trick shot to get an idea of what you can create after a little practice.

The activities in the book get increasingly more difficult as engineers learn, design, build, test, evaluate, and redesign their contraptions. One of the challenges toward the end of the book invites readers to build a contraption using each of the six simple machines to pop a balloon. Give it a shot! 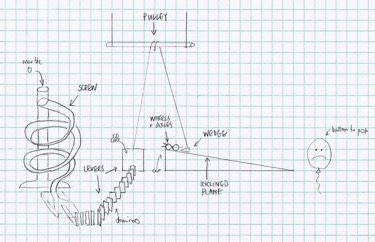